Full Circle Back to Director

It's funny how the circle sometimes completes itself.

Way back when, at the dawn of Motion City Films, there was only one commercial application for creating animation. It was a program called Macromedia Director. We bought this program and used it to create animations for an MTV contest, many corporate videos for companies like AAA (the Auto Club), Sheppard Associates, Ingram/Micro-D, and even Mattel.

The program had a great "score" interface that allowed you to drop art elements into cells and in-between these cells over time. It also had interactive features that could be triggered by events like the timeline getting to a certain position or a person triggering a key or mouse event.

Over time the program was acquired by Paracomp and that company was acquired by Adobe. Adobe had also acquired the much more powerful animation tool After Effects and also developed the vector-based Flash program which soon became the popular method to deliver interactive media and animation on the web. So Director just sort of languished. We had no real need to upgrade it or use it after about Director 8, which we used for some Enhanced CD development (audio CDs that contained a hidden interactive CD-ROM track).

Director was also responsible for a trip to Brazil. A local training company appreciated some of the stuff I had done with Director and asked me to go to Brazil to teach some production people to create interactivity. But when I returned I focused more on animation for film and video and really dug into After Effects.

I thought that was that for Director until earlier this year. I got a call from my friend David Watkinson who was working on a television show. They were creating interactive screens for on set display. He asked if I remembered Director and I told him I had some memory of it. He then asked me to join the production; they had a huge amount of screens they needed, especially for the season finale.

It was exciting to be working back in Director again and I learned a few things. First of all, it seems pretty much all of those computer interfaces, heads-up displays, iPad screens, and video playback you see in movies and TV are running through Director. Sure, some screens are blue or green and the interactivity is added in post, but for the shots where the real playback is needed, it is usually done with Director.

Also, it was remarkable how little Director had changed over the years. I guess it is a testament to what a great little program Marc Canter developed back in the day. I mean how many other development tools have basically stood unchanged for 15 years or so. The program is capable of generating a Mac and PC app as well as an app for the iPad and Android.

I hope Adobe decides to show this program a little love. At the latest Adobe MAX convention I tried to advocate for it. Why not roll this program into the Creative Cloud? There is a part of the licensing agreement that says Adobe gets 10% of what the developer gets if they make a commercial product with Director. So why not get this amazing "App Engine" into as many hands as possible. Who knows if the next Angry Birds if going to be developed by a Creative Cloud member? 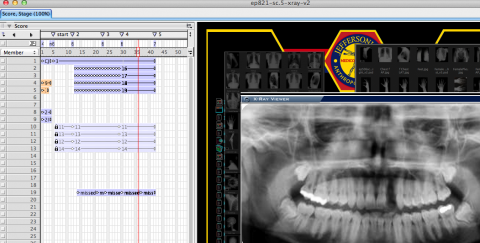